Oleh Arfan La Angka 09 Apr, 2015 Posting Komentar
“I kept always two books in my pocket: one to read, one to write in.” — Robert Louis Stevenson

“Start writing, no matter what. The water does not flow until the faucet is turned on.” — Louis L’Amour

“Read, read, read. Read everything  —  trash, classics, good and bad, and see how they do it. Just like a carpenter who works as an apprentice and studies the master. Read! You'll absorb it. Then write. If it's good, you'll find out. If it's not, throw it out of the window.” — William Faulkner 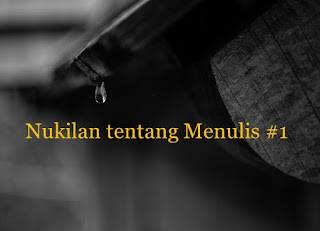 “I do not over-intellectualise the production process. I try to keep it simple: Tell the damned story.” — Tom Clancy

“You can always edit a bad page. You can’t edit a blank page.” ― Jodi Picoult

“Editing might be a bloody trade, but knives aren’t the exclusive property of butchers. Surgeons use them too.” — Blake Morrison

“The task of a writer consists of being able to make something out of an idea.” — Thomas Mann

“We write to taste life twice, in the moment and in retrospect.” — Anais Nin

“You can make anything by writing.” — C.S. Lewis

“Find your best time of the day for writing and write. Don’t let anything else interfere. Afterwards it won’t matter to you that the kitchen is a mess.” — Esther Freud

“Anybody can make history. Only a great man can write it.” — Oscar Wilde

“Don’t tell me the moon is shining; show me the glint of light on broken glass.” ― Anton Chekhov

© 2020 · Probacatulis · Made with curiosity and black coffee · Arfan La Angka